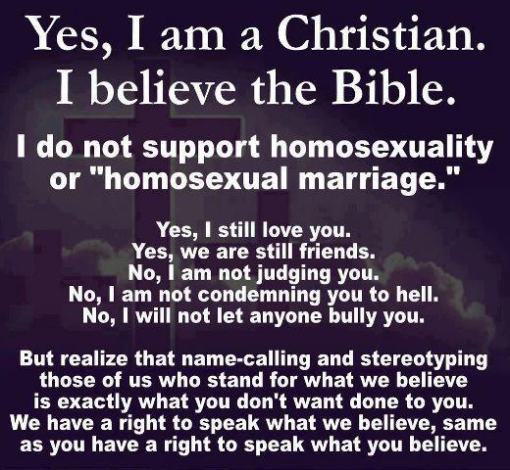 Have you seen this meme? It has just hit facebook and is all up in my feed. Here is my response…

Yes, I am a follower of Jesus.
I believe the truth contained in the Bible and in THE TRUTH who is Jesus Christ.
I support my homosexual friends and their right to marry the person they love.
Yes, I love all people.
Yes, I am still friends with people who disagree with me.
No, I am not judging you.
Yes, I am trying to persuade you to love like Jesus.
Yes, I will stand up for your right to free exercise of your beliefs as long as they don’t infringe on someone else’s right to practice theirs.

I will never call you a name but I will point out where your practice lacks grace, mercy and compassion. I will not remain silent as you say that I do not respect the scriptures or that I do not believe “the truth”. I will not remain silent when people God loves are being told they are not welcome in his family. I fully support your right to speak what you believe, and I will continue to speak what I believe.

* Due to demand I turned this into a meme of my own which you will find below. Please feel free to share it. 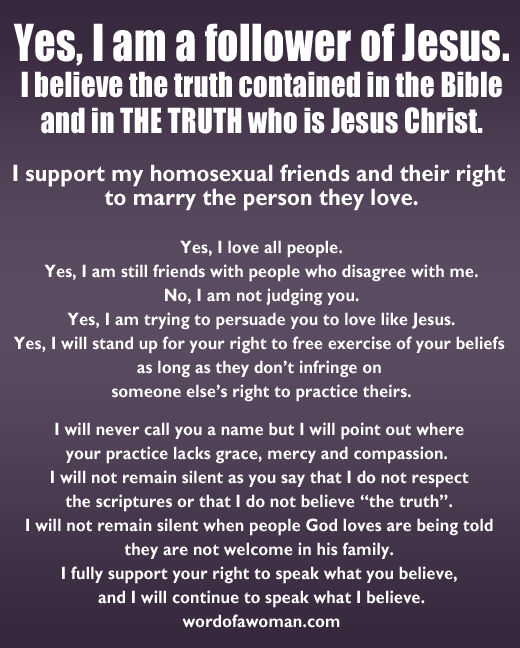 I know. I know. I have been M.I.A. for waaaay to long. I sadly have not had time for writing but I have had time for reading. Here are some I think are worth reading from the last few weeks to see you through the Spring Break holiday.

Enjoy my lovelies. I’ll see you on the other side.

For one thing “Truth” is not rational abstraction — a concept, doctrine, or idea you can write down — especially not one which you conveniently have right and everyone else conveniently has wrong. Truth-as-a-rational-abstraction constitutes a denial of the incarnation (and big chunks of the New Testament). Doctrines and theologies can point to the truth but they are not themselves the Truth. The Truth has been revealed to us in and through Jesus Christ. Truth is a person. Jesus is the Truth.

How Being a Pastor Changed My Thinking on Homosexuality

Several things clicked at once: These guys had burdens placed upon them by others(people like me) that had nothing to do with Jesus. Jesus said his interpretation of religious Law, his yoke, was easy and his burden light (11:38). His opponents, the religious leaders, accused him of abolishing the Law (5:17) and ignoring their pet scriptures about holiness and who was “in” and who was “out.” The fundamentalists of Jesus’ day were threatened by his message of an easy yoke, and they made his followers out to be “abolishers of the law.” In response, Jesus  commanded his followers to out-love, out-pray, and out-give his detractors (5:21-7:27).

I wanted to share these initial thoughts because I think it’s important to remind ourselves now and then that we’ve been wrong before, and that sometimes it’s not about the number of proof texts we can line up or about the most simplistic reading of the text, but rather some deep, intrinsic sense of right and wrong, some movement of the Spirit, that points us toward truth and to a better understanding of what Scripture really says.

But That’s What the Bible Says

And this is the sad thing.  That we’d rather live with cognitive dissonance, believing that women are somehow equal but yet somehow lesser– or that they are to be restricted for no reason, but that God is still just– than to believe it’s possible we’re misreading our Bibles.

We’d rather restrict women and have the Bible be “clear” than admit that we just might be wrong.

I know, you might think I’m overreacting, but the Bible is very clear on the role of bears in human relationships. They are meant to be voracious killing machines. I mean, the ONE COMMAND God gives specifically to bears is to “Arise and devour much flesh.” This attempt to anthropomorphize and humanize bears strikes at the heart of everything the gospel teaches about bears.

Feminism and Me: When I cannot cook but I am still a person

The first time I began to wonder if perhaps the evangelical narrative of gender roles I’d absorbed needed a little tweaking, I was 19 years old and finishing my first year of bible college, and I was in love with him. I sometimes like to think that he was in love with me too (a story for another day), but only to the extent that a heart as superficial as his could possibly be. One morning after a particularly intense cup of coffee the night before, I woke up to a novel in my inbox which basically boiled down to “I like you but you are unsuitable because you are initiatory in your relationships with men and also you cannot clean or cook.”

Jesus is my favorite feminist.

He gave her the privilege of delivering the very first Resurrection sermon.

To a room full of men.

CHASE AND THE ONION MAN

You and I, we have a lot of love to share. Maybe that man doesn’t have much. Maybe we offered him some today. People who behave badly still need love.

The Bible Isn’t The History You Think It Is

The situation not unlike a modern newspaper, which combines news with opinion, puzzles, comics, etc. The news can be accurate even if the comics are not. The same is true for the different parts of the Bible.

I stopped guarding my heart ten years ago.

All relationships invite our hearts to walk through disappointment and joy, the more intimate the relationship, the greater the capacity for both those things.

The Irony of Christian Celebrity

What if a desire to “make an impact” is just a form of grasping for immortality?

What if a quest for influence is actually another way of chasing fame?

What if efforts to “expand the Kingdom” are really monuments to our entrepreneurial skills?

What if, in the name of building platforms to proclaim the Gospel, we have elevated people into Christian celebrities?

What if we’ve added God to an already crowded house of idols—the idols of fame and success?