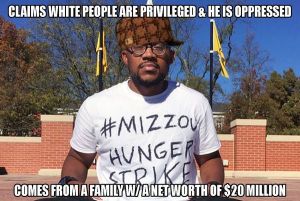 So, this morning I see that people are getting all worked up because Jonathan Butler, Mizzou student, activist and hunger striker, turns out to have a father who is quite wealthy? How wealthy you ask? His dad made 6 million last year and his family has a net worth of over 20 million. This has a lot of (mostly white) folks REALLY upset. I mean, hey, he’s got money, why is he complaining? How can there be racism when you are able to pull down that much money?

I am going to let you in on a little secret…

Having money does not shield you from racism.

I will say that again. Having money does not shield you from racism (or sexism or homophobia or any other form of discrimination, except for people who are discriminated against for being poor. Money will help you out with that one).

Just because a black student (or professor) has money does not necessarily mean they are treated equally at Mizzou (or anywhere else for that matter). Do rich black people not experience racism? Do people ask them first if they have money before mistreating them and then decide against it if they are wealthy? No. Of course they don’t. Does being wealthy keep them from being pulled over for driving while black? Actually, no, it does not. Many times they are pulled over more often because they are black and driving an expensive car. Does it keep them from being assaulted by police? Again, no. Ask Thabo Sefalosha or James Blake the famous tennis player. I have very successful professional friends who are followed in department stores, called “boy” by police officers in front of their kids, and whose kids have been called the n-word at their posh private schools.

Question: What does having money have to do with being treated as less than because of the color of one’s skin?

Answer: Not a damn thing. Privilege is not just about money.

2 thoughts on “Mizzou: What does being rich have to do with it?”