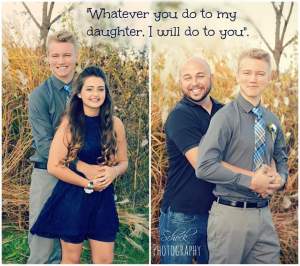 If you’re like me you’ve probably seen this picture at least 20 times in your news feed by now. If not, well, count yourself lucky. It has been picked up by news outlets, shared on social media and perhaps most disturbingly touted as an example of good parenting by virtually all of them, including Seventeen Magazine.

You pretty much already know the story just from looking at the picture, it’s the tired trope of the overprotective dad. It is literally a joke (with a healthy side of “I’m not really joking”). You can find example after example with minimal effort.  I have even written about other examples in the past.

I know what some of you are thinking, and it is exactly what many of the articles written about this meme so far – “It’s really a great way of saying, “Haha, I’m cool and totally have a sense of humor. But, also, I’m watching you, buddy.””

But is it really a great way? Is it?

I don’t think it is.

I’m sorry, I just don’t get it. First and foremost it treats the daughter as a passive participant. “Whatever you do to my daughter.” Unless it is rape, it takes two to tango sir. Your daughter is a free moral agent, what she chooses to do or not to do with a boy is not only because it is what the boy has decided. To bypass your daughter and go straight to the boy and lay all the responsibility on his shoulders teaches your daughter all the wrong lessons. For one it teaches her she is a passive victim and at the whim of a boy, his hormones or any other peer pressure situation. In addition, it tells her that she is powerless in the relationship with this boy and that you feel he is the one in the relationship with all the power. If I am not mistaken, isn’t that the opposite of the message you are trying to send, sir?

The second thing I think is just plain weird/creepy about this is, “Whatever you do to my daughter, I will do to you”. Really? WHATEVER? What if they kiss? What if they get to second base? Or third? What if they have sex? What if they have oral sex? Sorry to be so graphic, but do you see how weird/creepy this is????? Seriously, ewwwwww. Why would anyone see this as an appropriate thing (much less a model of good parenting) for a parent  to say to the young man (or young woman) about to go to Homecoming with your daughter?

One thought on “Whatever you do to my daughter I will do to you. Really?”