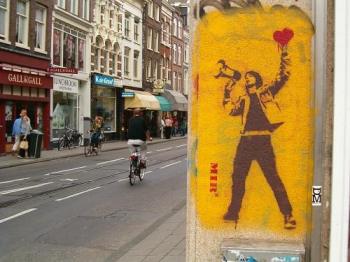 That moment when someone says something to you that changes your focus. Ever have one of those?

I bet you have. I know I have.

Recently I have had a couple conversations that have shifted my focus on the way I am going to be handling the crazy ass, hateful, ridiculous things being said by people who think they are serving Jesus by cheering for kids who are taught to parrot hateful songs, or calling for the extermination or legal prosecution of our homosexual brothers and sisters. Rather than focusing on these negative and hateful messages that do not bring life or hope, from here on I am choosing to focus on the people who are living in the light and bringing a message of hope and love to the world.This does not mean that I will stop standing up for people and standing up against injustice. On the contrary, I intend to fight it with the only weapons that work.

My focus was becoming increasingly negative and I was allowing the hate they have been spewing to become my focus which only brings hopelessness.  I had become increasingly frustrated, especially since the passage of Prop 1 in North Carolina, because these things are going on in churches. In a recent poll 91% of people 16-29 choose “anti-gay” to describe Christians. Heck, even 80% of church going people in that age group described the church as “anti-gay”.  I am hurt and distressed that people are taught that God can’t possibly love gay people. For crying out loud people even if you believe it is a sin, Jesus died for sinful people and the cheering for such a horrible song this week made me want to do something. Say something. Maybe because I didn’t know better when I was young and listening to people like like the leader of my former community saying homosexuals should be lined up and shot and producing songs like Mama’s Don’t Let Your Babies Grow Up to Be Homos”.

Well, this is where hope breaks in. While I do think it is important that people realize just how pervasive this kind of thinking is and while I do feel that people need to be informed, I also think that Dr. Martin Luther King Jr . had the right idea. Whenever he spoke about injustice he always cast it in the light of the truth. That side loses. Love wins. Dr. King called us to be our best selves, he called us to overcome, he called us to love. He set a vision for the dreamers. He invited us to hope that things could change; that God’s will could truly be done on earth as it is in heaven.

Bless those who persecute you; bless and do not curse them. Rejoice with those who rejoice, weep with those who weep. Live in harmony with one another. Do not be haughty, but associate with the lowly. Never be wise in your own sight. Repay no one evil for evil, but give thought to do what is honorable in the sight of all. If possible, so far as it depends on you, live peaceably with all. Beloved, never avenge yourselves, but leave it to the wrath of God, for it is written, “Vengeance is mine, I will repay, says the Lord.” To the contrary, “if your enemy is hungry, feed him; if he is thirsty, give him something to drink; for by so doing you will heap burning coals on his head.” Do not be overcome by evil, but overcome evil with good.

Not that this is easy. It isn’t. Individually we must love, even when someone is hateful towards us. This week on Primetime: What Would You Do? the scenario was that a young white woman was introducing her black boyfriend to her dad for the first time. He was not happy, to say the least, about their interracial relationship. There was an elderly woman who (after the young couple left) expressed support for the father and her extreme distaste for interracial relationships. At the end of the segment after it had all been revealed for the social experiment it was, this beautiful young black man hugged that ignorant old woman and do you know what he said when asked why? He said I have been taught all my life that people like her exist, I wanted her to know what kind of person I am.
Dr. King said,

That is my plan. Let us drive out the darkness with the light. Let us drive out the hate with love. Let us overcome evil with good. Starting today, whenever I am feeling hopeless about the state of this or like the darkness might be winning. Instead of focusing on that I am going to feature a person or organization who are bringing light, hope and love. I am going to start today with Minnesota Pastor Oliver White.  According to the Independent, Southeastern Minnesota‘s daily newspaper, Pastor White is

A black leader at the helm of a predominantly black church, White — who marched for racial equality during the Civil Rights era — faced pushback from his own community after he stood up for gay rights in 2005.

During a national synod of the United Church of Christ in Atlanta, he joined a majority of delegates from across the country in voting to adopt a resolution supporting gay marriage.

He returned to his congregation the following Sunday and explained his decision. Almost immediately he saw church membership plummet. Within weeks he lost two-thirds of his followers, and now a Sunday sermon draws at most about 20 people.

He now stands to lose his church for good as their balloon payment of 200k came due yesterday. Even though Pastor White, 69, stands to lose everything he stated in a recent interview,

“If we are not successful, I am not going to feel that we are defeated,” White said. “I’ve often said if one person has been turned around, if their thinking has been turned around, and they are no longer homophobic, and they can reach out and love their brothers and their sisters as they love themselves, unconditionally, without labeling them in any way, then losing the church will not be in vain.”

Here’s to you Pastor White. You are my hero of the day and the champion of those who Christ loves. Your reward sir is in heaven.

Grace Community United Church of Christ
You can email your word of encouragement here: mystory42@hotmail.com