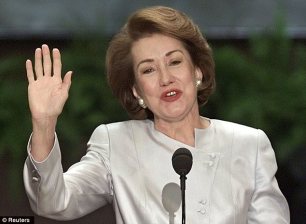 This whole election cycle people have been telling themselves and others that they would love to see a woman become President — just not THAT woman.

I would love to believe that, but I just don’t.

Back in 2000 I was a Republican (I know, you’re shocked). In fact up until Obama’s Second term and an ill-advised vote for Ross Perot I always voted straight Republican ticket. Anyways, in 2000 Elizabeth Dole was running for the Republican nomination. She had a very impressive resume:

Ultimately Sen. Dole dropped out of the primaries and the nominee was the much less qualified George W. Bush.

I can still remember people saying that they wouldn’t mind voting for a female candidate, just not this particular female candidate. Ironically people were simultaneously saying the same thing about Hillary Clinton who was running for Senator in New York.

In 1999, when rumors had Dole preparing for a run at the White House and Clinton for Daniel Patrick Moynihan’s Senate Seat, Margaret Talbot, then a senior fellow at the New American Foundation, wrote in the New York Times Magazine: “Remember the Year of the Woman? Well, it’s beginning to look like 2000 might be the year of the wife.”

Labeling both these female candidacies – one from the right and one from the center — a symptom of political “dynasticism… in which a woman’s own political career is an outgrowth of her husband’s,” Talbot then warned in a burst of regional stereotyping that Dole’s “sugary southern charm will only carry her only so far; who wants a magnolia, even a steel magnolia, for President?”[2] The nation proceeded to elect (or not, depending on which hanging chad you look at) a male southerner, and a dynastic candidate with a far shorter resume and fewer intellectual accomplishments than Dole, George W. Bush.

Dole herself said,“Women in the Republican Party do not show enough support for a woman candidate. It’s much tougher than being a Democratic female candidate.”

Many many years ago, Kent asked me who would becomePresident first, a black man or a white woman? I did not hesitate to say a black male. Because women of all races are still seen as less competent for leadership than men — sadly by both men AND women.

Apparently, we are still not ready. Even though Hillary received a majority of the popular vote, it was not by enough to propel her to an electoral college victory. Say whatever you want about Hillary, make whatever excuses about why you want a woman,“just not THAT woman”. But The United States of America just said they prefer a man with ZERO experience in government and ZERO foreign policy experience,  who sexually assaults and degrades women, publically mocks the disabled, will not disclose his taxes, and has 5 children with 3 women, diminished the sacrifice of a POW and a gold star family, and is currently involved in a fraud lawsuit and 3500 other lawsuits over an eminently qualified woman candidate.

I will leave you with this from the onion:
WASHINGTON—Political experts are hailing Donald Trump’s historic presidential victory early Wednesday as a resounding declaration that the nation is finally ready to cast off the tyrannical yoke of moderate respect for women that has suffocated the citizens of this country for generations. “Under Trump’s presidency, we can now look ahead to a bold new era in America in which we will no longer suffer under a repressive ideology that demands basic decency and relatively equal treatment toward half the nation’s population,” said Harvard political science professor Gregory Nagle, adding that citizens could now live free from the fear that they would never again be lightly chastised for making derogatory comments about a woman’s appearance or implying that women are less capable or intelligent than men. “For far too long, Americans have been at the mercy of an authoritarian belief system that sometimes presses employers to consider hiring women for high-level positions and, under certain circumstances, allows women to have control over their own bodies. And faced with the unsavory prospect of women receiving fair pay or having their sexual assault claims taken seriously, Americans went to the polls today and made their voices heard loud and clear. This is a bright new day for America.” In a similar finding, political scientists asserted that Trump’s election also represented a decisive move by the people of this country to shake off the brutal fetters of half-hearted attempts at racial tolerance.

P.S. You think it was bad for Dole and Clinton? Have you seen what they have said about Michelle Obama? And she hasn’t even run for office yet.