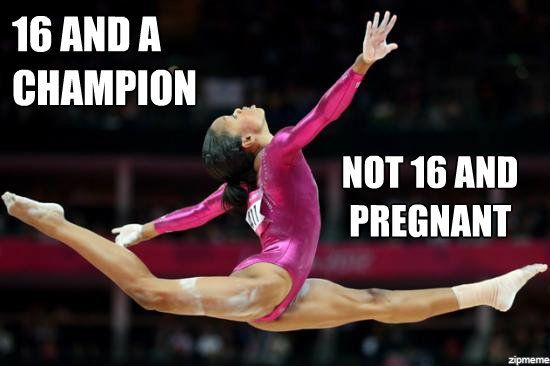 Have you seen this meme? Probably.

What about this one?

Probably not since I just made it.

We had  7 olympic women under 18 who won gold in the London games.

I know what you may be thinking and no, I don’t think it is a racial thing, after all Clarissa Shields (17) is also African American and I have seen no such meme’s about her. Maybe because she is a boxer? I really have no idea. Perhaps it is a play on the name of the popular MTV show 16 and Pregnant. But then why not  McKayla Maroney?  Who knows. Maybe it is because Gabby is more popular, being the winner of the individual all around gold. Maybe for some other reason.

Also, why are there no meme’s of a teenage male olympian that say, “16 and a champion. Not 16 and a baby daddy?”
Just sayin’.

All that said, I am sure the meme of Gabby Douglas was made by someone who was well meaning and wanted to make it as sort of an “atta girl”. I know it was posted by some of my friends for that very reason. And while I appreciate that they may not have meant anything by it, why do we need to turn this young woman’s achievement into a PSA to prevent teen pregnancy? What is it about humans that want to turn one woman’s achievement into an opportunity to shame an entirely different group of women.

“Wow! That meme about Gabby Douglas I saw on Facebook is birth control enough for me!”, said no teenager with raging hormones ever.

This is the question I try to ask myself before reposting a meme (or anything else for that matter)…What message does it send to my friends if I repost this?

We must stop and ask ourselves…

Is this really the message of love I want to send to them? Will this make them feel more or less likely to turn to me for help if they need it?

I know I have friends who will read this who have posted this meme. Please forgive me if you feel attacked here. That is not my goal.
My goal is for all of us to consider how the little things we post may affect our friends and our ability to love them the way we intend to…myself included.

9 thoughts on “Memes the Word.”