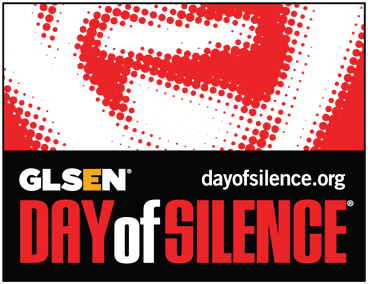 Today is Good Friday. The day we set aside to remember the brutal slaying of the lover of our souls. The day our sin was heaped upon him and darkness covered the earth and then it happened.

Love won. The veil was torn in half that kept us out of the presence of God. Death and sin were defeated and forgiveness was purchased for everyone for all time. Grace won. Mercy won. Love won.

So how can it be then that this morning I am hearing about how Christian groups like Concerned Women for America, American Family Association, Citizens for Community Values, Faith 2 Action, Liberty Counsel, Focus on the Family and Save California are standing up and speaking out against The Day of Silence? How did we come to this? How did Christians become known by what they’re against instead of “by their love.” I am sad. I am disappointed. I am sorry.

The Day of Silence is April 20th and according to GLSEN:

The National Day of Silence is a day of action in which students across the country vow to take a form of silence to call attention to the silencing effect of anti-LGBT bullying and harassment in schools.

Given that according to bullyingstatistics.org, 9 out of 10 LBGT teens report being bullied at school and these students are two to three times more likely to commit suicide than their straight peers, how can this be a bad thing and how in the name of all that is holy can anyone who claims to be a Christian be against it? In my humble opinion, the Christians should be the first people participating even if their theology says homosexuality is sinful. We are sent to bring reconciliation, to set the captives free, to love without an unless. We should be known for our love not our judgement, hypocrisy and homophobia. Sadly we are not. According to Barna, the vast majority of non-Christian people age 16-29 — 91% — said Christianity had an anti-gay image, followed by 87% who said it was judgmental and 85% who said it was hypocritical. And we wonder why young people are leaving the church.

What is perhaps the most disheartening thing is all the misinformation and fear mongering going on. According to Laurie Higgins of the Illinois Family Institute,

This is FALSE. On the GLSEN site it unequivocally states:

While you DO have a right to participate in the Day of Silence between classes and before and after school, you may NOT have the right to stay silent during instructional time if a teacher requests for you to speak. According to Lambda Legal, “Under the Constitution, public schools must respect students’ right to free speech. The right to speak includes the right not to speak, as well as the right to wear buttons or T-shirts expressing support for a cause.” However, this right to free speech doesn’t extend to classroom time. “If a teacher tells a student to answer a question during class, the student generally doesn’t have a constitutional right to refuse to answer.” We remind participants that students who talk with their teachers ahead of time are more likely to be able to remain silent during class.

Sadly, this type of thing isn’t limited to Miss Higgins. These groups would have you believe that The Day of Silence as well as other anti-bullying rules and laws that specifically mention homosexuality are really not about protecting these kids from bullying but are more about a political agenda. They say that they are “of course” against bullying for any reason. I honestly think they believe that. Part of the problem here is that anti-gay bullying and homophobia will not end without education; without people recognizing that we are after all, all the same. And for the Christians specifically, that we are all image bearers of God, even homosexuals. It seems to me that they are afraid if their kids realize that these are people just like them, they might somehow become gay when they would have otherwise been heterosexual. If you look at the science this just isn’t so. What is so is that these are people who hurt and love and dream; people who have contributed to society in many positive ways; inventors and scientists, writers and philosophers, doctors and attorneys, politicians and professors, brick layers and bus drivers – just like the rest of us.

Not that long ago in our history the same type of eduction was needed during the civil rights movement. Today we take time out to recognize the great achievements of black Americans, women, Hispanics, Asian Americans and other formerly overlooked people. Why? Because as a society we recognize that we fear what we do not understand. Education removes fear; Fear that prevents us from loving our neighbor. Honestly, I am not sure what it is that these brothers and sisters are so afraid of; You cannot “catch” homosexuality.

Christian Groups in opposition to the Day of Silence have proposed a few options.

So please, please on this Good Friday, let us not curse the silence. If you are a person like me, a Christian who believes that homosexuals should be allowed to marry and that people can be both practicing homosexuals and Christians, then, please, wholeheartedly participate in Day of Silence. But, if you are a person who disagrees with the objectives The Day of Silence, I implore you, don’t keep your children away. Don’t encourage fear or spread falsehoods. Encourage them to love their neighbor and participate in The Golden Rule Pledge. Everyone deserves to be safe at school. No one deserves to be bullied. They don’t want to make your child gay. They just want to be free to live their lives without persecution especially from the one group on earth who is supposed to be “known by their love.”

Must Be Spring, Day of Silence Derangement Syndrome is Breaking Out