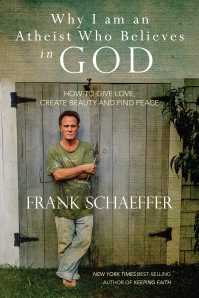 This morning I would like to share with you some more of my favorite lines and excerpts from this week’s featured guest, Frank Schaeffer. I have really enjoyed sharing with you about this book this week. I hope you will pick up a copy and give it a read. You will be richer for it.

Our relationship is founded on me saying “I am so very sorry for being an asshole” and then working to change.

These days I hold two ideas about God simultaneously: he, she or it exists and he she or it doesn’t exist.

These days I hold two ideas about God simultaneously: he, she or it exists and he she or it doesn’t exist. I don’t seesaw between these opposites; I embrace them. I don’t view this embrace as requiring a choice between mere emotion and fact, or between evolutionary biology and spirituality. Reality can’t be so neatly parsed. Neuroscientists who analyze our chemistry-based brains still fall in love. Preachers declaiming a literal view of the Bible and a so-called young earth still use petroleum products only found because geologists operate on the premise that the earth is 4.54 billion years old.

I don’t view my embrace of opposites as a kind of agnosticism. I view it as the way things actually are. An agnostic neither believes nor disbelieves in God. I’m not that person. I believe and don’t believe at the same time.

Lucy and Jack seem to accept that something may never have happened but can still be true.

We’re all of at least two minds.

I can’t objectively describe reality because I’m trapped in the moving target we call time.

Jesus liked hanging out with women and kids too! So fuck you!

Jesus undermined the inerrancy of the scriptures in favor of his version of pragmatic empathy!

I hate to be the bearer of bad news to anyone hooked on apocalyptic fantasies, but things are getting better. Jesus did in fact change everything.

What Jesus triggered was an inexorable shift to a higher level of ethics that eventually changed the trajectory of human history. Love, fairness, opportunity, freedom and goodness eventually begin to trump mere survival and brute power.

We have Jesus and his Enlightenment prophets to thank for the humanistic ideas on which America was founded. If you’re one of the people Jesus is said to have favored—a child, a woman, someone ill, a sex worker, someone regarded as untouchable, old, ugly, abandoned or “the other” in some other way—and you are being cared for by unbelievers, is Jesus’ example being followed? Or does Jesus only live in correct theology regardless of how little a Christian may care about your wellbeing?

Jesus either said God “is kind to the unthankful and to the evil” or he said that God will burn his, her or its enemies in hell. You can’t have it both ways.

The idea of atonement—Jesus “dying for our sins” as if to satisfy God—is the opposite of evolutionary truth. Evolution doesn’t demand justice; it demands life. In evolution the result of suffering, killing, extinctions, death and chaos is the learning curve undertaken by genes that pass on knowledge in an effort to survive. No one from the first primitive microorganism to Jesus has died to “satisfy” an angry God.

Following Girard’s argument, death—including Jesus’ death—occurs so that all may live, learn and eventually reach an end point of perfection when the entire cycle of creation from the beginning to end will be vindicated, perhaps even understood. A great milestone has already been passed on our evolutionary journey: consciousness has achieved empathy.

A spiritual non-material-based way of life turns out to be the actual way we live no matter what we say we believe. We live by ethics not found in nature and we enrich our lives with art. That says something to me. Maybe a purely material view of the universe and of ourselves is not in fact a fact.

Our longing for spiritual joy and our ability to appreciate beauty in a way that turns the physical world into a spiritual fact unnerves people who believe that spirituality is an illusion. They tend to demote notions of beauty along with demoting us. Like restaurant critics who hate food, some adamantly secular art critics have promoted art that denies the very idea of art.

The Internet and its innovators are doing more to facilitate the reemergence of content-laden, craft-rich, hands-on art, individuality and perhaps even spirituality, than all the galleries, agents, critics, churches and publishers combined.

Those of us raised in the Christian tradition need to choose to either see God in Jesus or to continue to let the Bible define God. Our tradition says that Jesus is God. Maybe we should act as if we think he is instead of worshipping a book. Maybe we should be brave enough to admit that we are compelled to either become blinded ideologues or we need to forthrightly pick and choose what we follow in the Bible. Most Christians do that anyway, many just don’t admit it.

I say the words “I love you.” I know I mean them though because I take half a day to clean, to shop for flowers, to think about taking Genie to bed, to experience a flutter of anticipation as she walks out of the airport concourse and I see her again. Yet while waiting for her there I’ve been casually watching a flight attendant’s ass. I’ve been a saint and sinner, a jerk and a better man than I once was, loved by my wife, children and grandchildren, yet sometimes still a tyrant.

The words of the Creed and my words of love are metaphors for something that is ultimately indescribable but ever present and never perfect. What I know is that whatever the Creed means, I have been overwhelmed by love. I have seen “Light of Light” in action, felt its power while not understanding from whence the light pours into me.

Our best hope is not found in correct theology, the Bible or any other book, but in the love we express through action rather than words. Our best hope is that love predates creation and thus that the Creator sees us as ever young. Our hope is that when we look at God through the eyes of the loving Christ we will see who God really is. Our ultimate hope is that God will be looking back at us as we’d like to be seen.