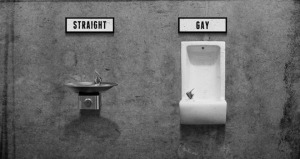 Separate but equal is not equal at all. Separate never was and can never actually be equal. Equality by definition is “the state of being equal, especially in status, rights, and opportunities”. A conservative friend of mine posted an article today that asserted that there are plenty of other businesses perfectly willing to bake the cake or spin the tunes or arrange the flowers at a same-sex ceremony, why do folks like me want to tell them they have to. Or better yet, why would a LGBT person want to have a cake made by a baker that didn’t want to make it? Good question. Perhaps we should ask the young men from the Greensboro lunch counter why they would want a sandwich made by a person who didn’t want to make them one. Wouldn’t they rather have a nice sandwich made by someone who wants to make it? Seriously, why are separate water fountains so bad? You’re still getting water. I mean why can’t these people just go to a nice “gay” cake shop, buy a nice “gay” cake and leave me the hell alone? Sigh.

How can we as Americans (of any religion) think refusing service based on nothing more than who the client loves is okay? We do not allow this when it comes to interracial couples. At least not anymore. Why do you suppose that is? Right. The Supreme Court. Up until the Loving vs. Virginia ruling the United States allowed discrimination against interracial couples based solely on the fact that many Christians thought race mixing was a sin. Interracial marriage was illegal and interracial were forced to live without the benefits of marriage. They were also frequently discriminated against simply because the person they loved was of a different race. Now, of course, the vast majority of us realize that was not okay. Why? Right. Because laws! (You are really getting the hang of this) Once the law was overturned and interracial marriages were allowed to go forward public opinion slowly began changing, time passed and people realized how wrong it had been to have outlawed it in the first place. Especially younger people. Interestingly enough in a new poll from the Public Religion Research Institute showed that millennials now find homosexual sex between adults more morally acceptable than casual sex. And according to a Pew Research poll support for same-sex marriage is also at an all-time high of 67% among 18-32-year-olds. The tide is turning.

If we begin allowing businesses to discriminate based on the owner’s idea of who is a sinner not worthy of cake (or flowers, or photos or tunes) where will it end? Can my local conservative Muslim-owned dry cleaner refuse to serve me as an unaccompanied woman? Can I, as the owner of a diner not allow black people to eat at my lunch counter? Can a Palestinian born business owner refuse to sell their goods or services to a Jewish person or vice versa? Can my Catholic pharmacist refuse to fill my prescription for birth control pills? Is that really the America we want to live in? I hope not. The America I love doesn’t put up with that crap. Are there still people in the United States who discriminate? You bet. Way. Too. Many. But what do our laws say these folks have to do when a person they disagree with comes into their place of business? Does the law demand they change their beliefs? Nope. Does the law require them to love the person? Nope. Does the law state they must agree 100% with that person about the nature of sin? Nope. The law just requires them to keep all that shit to themselves and bake them a fracking cake or sell them curtains, or paint the nursery for their new baby. If you disagree with how the person you are serving lives their life that’s your issue, not the person coming into your business to buy what you are selling.

Alright, now I want to talk directly to the Christian folks and Anti-gay lobbyists who are the ones really pushing these laws forward. Do you really think Jesus would refuse to serve “sinners”?  Is that really the Jesus you serve? Personally, I think Jesus is quite disgusted that his name is being used to refuse to serve others. I cannot recall Jesus ever saying a damn thing about refusing to serve ANYONE. In fact, I am pretty sure he said the exact opposite. Wait here. I will get you an example…
Ah, here we go, Matt 10:42-45:

But Jesus called them to Himself and said to them, “You know that those who are considered rulers over the Gentiles lord it over them, and their great ones exercise authority over them. 43 Yet it shall not be so among you; but whoever desires to become great among you shall be your servant. 44 And whoever of you desires to be first shall be slave of ALL [emphasis added]. 45 For even the Son of Man did not come to be served, but to serve, and to give His life a ransom for many.”

It is too bad that it will likely take a change in the laws of the United States to help conservative Christians see that they are at odds with the God they claim to follow and that it is time to actually serve everyone. Just like Jesus.